This week, two friends have their books coming out, and they’re throwing parties–shh, one of them is a secret!

Nguyen Tran of Starry Kitchen has their Adventures in Starry Kitchen book coming out today!  If you go to StarryKitchen.com/book, you can find links to order.  Also keep an eye out on their website, Facebook, and other social media for some special events later this week!

Bill Esparza of Tacolandia fame (see last post) has his book, L.A. Mexicano, coming out this week too, and he’s got a talk and book signing, at Vroman’s in Pasadena.  $35 gets you entry to the event, a copy of the book, and food from two of my favorite chefs–Gilberto Cetina Jr. (Chichen Itza, Holbox) and Eddie Ruiz (Public Wine & Beer).  That’s a pretty darn good deal!

StarChefs just announced their 2017 Los Angeles Rising Stars: Why They Shine list andmenu throwing a gala next week to celebrate.  The line-up is impressive, from Johnny Zone of Howlin’ Ray’s to Vartan Abgaryan of 71 Above and so much more!  Check out the and you’ll understand.  Tickets are $95 for GA and $125 for VIP w/private reception (and caviar!) at Vibiana.

06. June 2017 by The Offalo
Categories: Events and Festivals | Leave a comment

Who needs a short intro spiel?  Here are the food events and festivals I’m interested in this month:

Saturday, June 10th – LA Food Fest:  Last year’s LAFF was quite ambitious, with a pre-event launch party, private rose garden meals, and a main event with multi-tier pricing that was a bit confusing.  This year, LAFF is going back to basics, with one big event and unlimited sampling of the food and drinks that will be there.  The line-up is as good as ever, with a special curated group of chefs mostly from Mexico heading up a Nuevo Gastropub section of the event, including Diego Hernandez of Corazon de Tierra.  Other restaurants include Coni’Seafood, Gus’s Fried Chicken, Hotville Hot Chicken, Little Jewel, Pasta Sisters, Popdup, Ray’s BBQ, Starry Kitchen, Sunny Blue, and more!  Desserts by Afters Ice Cream, Amazebowls, Fluff Ice, Salt & Straw, Wanderlust, and others will be there too!  Tickets are $65 for GA or $95 VIP (one hour early entry, VIP lounge access).

Sunday, June 11th – Taste of the Nation Los Angeles:  TOTNLA is a relatively small but star-packed event benefitting No Kid Hungry, a charity striving to end childhood hunger.  The chef chairs this year are Bruce Kalman (Union, Knead), Dakota Weiss (Estrella, Sweetfin), and Nick Shipp (Upper West), and they’ve curated a great line-up of restaurants, including Bazaar, Border Grill, The Cannibal, chi SPACCA,  Chichen Itza, Jitlada, Kali, Kato, Mama Lion, Rice Bar, Sotto, Wexler’s and more!  Tickets are $110 for GA, $160 for VIP (30 minute early entry, VIP bag, and there was a VIP lounge in the past), $25 for kids.  Get 10% off with code LABLOGGER10.

A post shared by No Kid Hungry Los Angeles (@nokidhungrylax)

Saturday, June 17th – Tacolandia:  One of my favorite events, LA Weekly’s mega-sized festival of all things taco is back and bigger than ever.  Blogger, cookbook writer, and James Beard winner Bill Esparza has curated a list of over 120 restaurants, chefs, etc., all serving up tacos for your pleasure!  Some of my favorites will be there, including Broken Spanish, Carnitas El Momo, Ceviche Project, Chichen Itza, Galaxy Taco, Guerrilla Tacos, Mariscos Guerrerense, Mexikosher, and really, way, way too many others to name!  Tickets are $45 for GA (VIP is sold out) for unlimited tacos!

(Ignore the presale code, this was an IG post from earlier this year.)

Saturday, June 17th – Dessert Goals:  If you don’t like tacos, well, then I don’t know what’s wrong with you.  But if you like sweets more than tacos, I guess that’s okay.  Happening on the same day as Tacolandia is Dessert Goals, a new(?) event here in L.A. with participants from all over the country serving up sweets and treats.  Local favorites like Amazebowls, Coolhaus, and more will be there!  Tickets are $15 for GA for 1.5 hours and you can purchase food from the purveyors that’ll be there, or $50 to access one of the workshops (includes GA too).

Sunday, June 25th – Tavern‘s Low Country Boil:  This 4th annual crawfish boil celebrates chef Amy Deaderick’s childhood growing up in South Carolina and having these feasts during crawfish season.  The $65 dinner is four courses with a country board of pimento cheese, pickles, chicken rillettes, and Triscuits; followed by a refreshing corn salad; then the main event of boiled sausage, potatoes, shrimp, and crawfish; and a cornbread peach cobbler to finish things off!  There’ll be live music too!

I’m sure I’m missing some other events, which I will add to this post (or start another post) to cover–please let me know what I should add!  :-)

03. June 2017 by The Offalo
Categories: Events and Festivals | Leave a comment

I wanted to call out a few additional events happening this month, mostly pertaining to the Times’ LA Food Bowl, but one by Los Angeles Magazine as well, but before I get to that, just wanted to say that the Food Bowl has been a rousing success!  Many events associated with it were already in the books but it’s cool that the Times was able to bring them under the Food Bowl umbrella.  Amongst them were Taco Madness and Masters of Taste.  Here are some delicious bites from each event:

I also attended a few panels, including the kick-off Chef’s Fable event and Food for Soul, and they were vastly entertaining–Massimo Bottura is hilarious–and educational.  And the 5-night-long Night Market was definitely a crowd favorite.  My highlights:

So for upcoming events, LA Mag is holding its second annual Bourbon, Burgers, and Beer event at the Victorian in Santa Monica, featuring burgers from BOA, The Cannibal, Cassell’s, Citizen, Erven, Pono, and more, with drinks from Four Roses, Maker’s Mark, Golden Road, and more!

As for LA Food Bowl, probably the most exciting event is the Beast Feast on May 21st, featuring an all-star line-up of chefs:  Fergus Henderson, April Bloomfield, Kevin Bludso, Dario Cecchini, Nancy Silverton, Mary Sue Milliken, Susan Feniger, and more!  And there are so many more events to choose from.  Go check out LAFoodBowl.com for more!

19. May 2017 by The Offalo
Categories: Events and Festivals | Leave a comment

May 2017 Food Events in Los Angeles

The month of April flew by, and now we’re already into the first month of May.  There are several great events this month, including a monster month-long one thrown by the newspaper of record in Los Angeles.  But first, tacos!

Friday, May 5th – LA TACO’s Taco Madness:  Yas, tacos!  LA TACO is throwing its mostly-annual (they missed last year) event, this year right behind Olvera Street near Union Station.  Event is 21+ and free–though you’ll need to buy your own tacos from the purveyors there.  But what a line-up of taco slangers:  Carnitas El Momo, Chichen Itza, Mariscos Jalisco, Tacos Punta Cabras, and my favorite, Guerrilla Tacos!

Sunday, May 7th – Masters of Taste:  Last year, the inaugural event surprised me with how smoothly everything went.  It helps they had the entire field inside the Rose Bowl to work with and a great line-up of restaurants.  This year, the participants are just as solid, with repeats Alexander’s Steakhouse, Hamasaku, Magnolia House, The Raymond, and others, joining newcomers like Bone Kettle, Kato, Mama Lion, and more!  Tickets are $105/$185 for GA/VIP–bring a hat!

Saturday, May 13th – EAT Show:  This new event–I believe last September was their first–has a daytime and an evening session and boasts some great newcomer restaurants including Baohaus, Kato, Little Fatty, Tentenyu, Tikifish, with some mainstays like Mariscos El Coraloense, Mexikosher, Otium, Seoul Sausage, and more!  Tickets are $60 per session.  Not all restaurants will be at both sessions, though the website doesn’t say which ones.  If you have a favorite, contact the organizers through their website.

Saturday, May 20th – EEEEEATSCON:  Boy, that’s a lot of capital letters!  The popular website Infatuation is throwing its first food festival in Santa Monica.  The event mixes keynotes, panels, musical performances and a la carte food–yes, you do have to pay for the food.  The price of admission is $40, check out the schedule for what that gets you.  And bring your wallet for great eeeeeats from Badmaash, chi SPACCA, Fat Dragon, Jon & Vinny’s, Mr. Holmes Bakery, NoMad Truck, Salazar, Shake Shack, Sweetfin Poke, and more!

ALL MONTH LONG – Los Angeles Times’s LA Food Bowl:  Trying to pull off a crazy #31daysoffood, the Times have packed the month of May with dozens if not hundreds of events!  The sheer volume is overwhelming even me!  There are so many events I’m hoping to attend that I’m not sure if I can make specific recommendations, but here goes:

Let me know if I’ve missed any events, I’m sure I have!

Can’t believe it’s April already! This month is heavily backloaded with multiple events happening the last weekend of the month, but there are definitely still events earlier in the month worth checking out:

Mondays, April 3rd and 17th – Hanging with Harris Dinner Series: Professional master of ceremony Billy Harris is literally the host with the most … events, that is! In addition to hosting two of my favorite food events–L.A. Loves Alex’s Lemonade and the aforementioned COCHON555 (all stops on tour!)–he somehow finds time to host a bunch of dinners here in L.A. Past dinners have sold out quick, but you still have a chance to hang out with Billy Harris a couple more times this month (and next), first with Michael Cimarusti at Connie & Ted’s on the 3rd and then with Neal Fraser at Redbird on the 17th. Tickets are $125.

Saturday, April 8th – FounderMade Future of Food Summit: The schedule for this conference is packed with panels from food entrepreneurs. Folks in the food industry will likely find this more useful than consumers, but it’s a great opportunity to see how others got started and how they’re thriving.

Saturday, April 29th – Burgers & Beer: LA Weekly’s celebration of meat, buns, and brews, has moved to April this year, rather than the blazing hot August dates in the past. Enjoy beers from Angel City, Firestone, Lagunitas, Pizza Port, Santa Monica Brew Works, The Bruery, and more, with burgers from Belcampo, Button Mash, Hinoki and the Bird, Hopdoddy, Myke’s Cafe, Pono Burger, Slaters, The Upper West, WOLF, and more!  Tickets are $55 for GA, $75 for VIP with early entry and a gift bag. 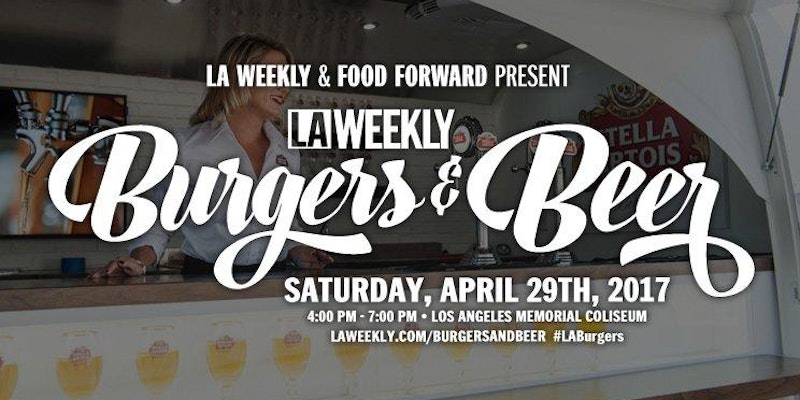 Sunday, April 30th – Dessert Fest:  Time Out L.A.’s sweets-centric event is the first of many taking place on the last Sunday of the month.  Enjoy desserts from Magnolia, Ococoa, The Walrus and the Hedgehog (love the name!) and more.

Sunday, April 30th – Taste of the Eastside:  This event celebrating all things Eastside, takes place in a beautiful oasis next to the L.A. River,  and features such establishments as Haché LA, Tsubaki, Red Herring, Silver Lake Wine, Fat Dragon, Go Get Em Tiger, and more!  Tickets are $45-$75 and just $12 for kids 12 and under.

Events to look forward to in May:  Masters of Taste (Sunday, May 7th), L.A. Times’ Food Bowl (all month long), and more!

02. April 2017 by The Offalo
Categories: Events and Festivals | Leave a comment