Not going to reinvent the wheel here–below is from the press release for the Los Angeles Times‘ The Taste event happening this weekend.  Even though I just spent a weekend attending 5 separate events for the LA Food & Wine Festival (check out #offalolafw2017 on IG for coverage), I’m very excited to attend The Taste, which is one of my favorite food events of the year.

This year, especially, I’m extra excited because one of my photos is part of the event, as I had taken a portrait of chef Gilberto Cetina, Jr. of Chichen Itza and Holbox, which he submitted for use in The Taste’s promotional materials! Without further ado, here’s what you can look forward to this weekend if you attend!

Tickets range between $95 and $150, with a $25 discount for current Times’ subscribers, and are available on The Taste’s website:  http://extras.latimes.com/taste/

29. August 2017 by The Offalo
Categories: Events and Festivals | Leave a comment

One of the biggest food events of the year for the greater Los Angeles area, the 7th annual Los Angeles Food & Wine Festival is taking place in a little under two weeks, from August 24th through August 27th.  Following the same format as last year, the festival consists of three evening events on Grand Avenue in Downtown Los Angeles, on red carpet, and under the stars and both the Broad Museum and the Disney Concert Hall:

LAFW doesn’t leave the daylight hours out either.  On Friday the 25th, seven different Power Lunches are taking place across the city at restaurants such as Craft, Ivory on Sunset, and The Church Key, with chef collaborations galore!  The two I’m most excited about, and I wish I could be at two places at once (but hope the event lets me cover at least one of these lunches) are at Redbird in DLTA and Michael’s in Santa Monica:

The first brings chef Trey Foshee (George’s at the Cove) up from La Jolla, to partner with Rory Hermann of the Sprout Restaurant Group, and Neal Fraser (Redbird, Vibiana, Fritzi) to Redbird.  There are many exciting chefs doing these Power Lunches, but I’ve interacted with these three chefs, separately, in the past, and not only are they talented, they are incredibly kind and generous.  Chef Hermann was a mentor to one of my favorite chefs in town, Johnny Zone of Howlin’ Ray’s.  Anyway, tickets are $125 for this, and all (but one) of the Power Lunches.

The second one I’m interested in will feature an incredible line-up of past Michael’s chefs including Brooke Williamson (Playa Provisions, Top Chef), Sang Yoon (Father’s Office, Lukson), Jonathan Waxman (Barbuto, Adele’s), Nancy Silverton (Mozza), and current chef Miles Thompson (Alumette).  Can’t even imagine what this collection of chefs can do together for one meal! Tickets are $150 for this one!

Speaking of Santa Monica, the Westside isn’t left out of the festival-style events either, though they do take place in the afternoons rather than the evenings.  On Saturday and Sunday, the Lexus Grand Tastings are taking place at Barker Hangar in Santa Monica.  Saturday‘s line-up includes Evan Funke (Felix), Holly Jivin (The Bazaar by Jose Andres), Joel Miller (The Wallace), Jon Shook & Vinny Dotolo (Animal, Son of a Gun, Trois Mec), and more!  Sunday‘s line-up includes Andre Bienvenu (Joe’s Stone Crab), Yousef Galani (FIG), Andrew Gruel (Slapfish), Nick Shipp (The Upper West), John Tesar (Knife at the Highlands), and Dakota Weiss (Sweetfin Poke).  Tickets are $175 for GA, $225 for VIP.

LAFW definitely puts on a grandiose display on Grand Ave (and at Barker Hangar, but no red carpet), and puts the spotlight definitively on the chefs.  It’s one of the biggest food events of the year.  I’m very much looking forward to it, and if you can swing the tickets, it’s definitely worth checking out!

14. August 2017 by The Offalo
Categories: Events and Festivals | Leave a comment

August has one of the biggest food events around at the end of the month, L.A. Food & Wine (August 24th through 27th), but there are some that look good for earlier in the month:

Saturday, August 5th – Plate by Plate LA:  As I mentioned before, this was the event that got me into food events several years ago.  It was also the first event I covered professionally, for Eater LA.  The restaurants are curated by none other than kevinEats, who always pulls together some of the best chefs and restaurants in LA to support this Asian/Asian-American organization, which is celebrating its 20th anniversary.

Returning restaurants include Hamasaku, KazuNori, Mardi, Redbird, Republique, Restauration, Rosaline, Starry Kitchen, and more!  Newcomers include Kali, Kato, Manuela, The Ponte, Tsubaki, The Wallace, WOLF, and more!  Tickets are $150 for GA, and $250 for VIP, which gives you 1 hour early entry to the event plus access to the VIP area for exclusive tastings from Otium and Scratch|Bar, who pioneered the mini four-course tasting menu at PbP’s VIP area years ago.

Saturday and Sunday, August 12th and 13th – BrunchCon:  This event, which started just last year, is back for two days of brunching.  I actually haven’t been to this event, so I’m not sure what to expect, and I won’t be able to attend, but it looks interesting, so I’m including it for you, my readers.  Tickets are $65 for GA and $90 for VIP, and there’s two sessions for each day.

I’ll do a post just on L.A. Food & Wine (August 24th through 27th) next week, so look for that!  Other events to look forward to, in September:  Los Angeles Times’ The Taste September 1st through 3rd, L.A. Loves Alex’s Lemonade on September 9th, An Evening on the Beach on September 14th, and more!

California Spirit, the gala fundraiser for the American Cancer Society, now in its 32nd year(!), took place at Sony Pictures Studios in Culver City on Sunday, July 16th.  Hosted by chef Richard Blais, the event is a relatively small, intimate affair featuring a dozen restaurants from around Los Angeles.  The event also featured a raucous live auction called by none other than Andrew Firestone of The Bachelor fame.

The restaurants in question ran the range of cuisines.  Some of the newcomers to the event included 71 Above, Ayara Thai, and Takami:

Barrel and Ashes brought three dishes, up from two from last year:

IDG is a restaurant group, also a repeat supporter of California Spirit, that brought multiple restaurants with them, BOA and ROKU, and each brought two dishes:

My favorite bite of the event was from Bouchon in Beverly Hills.  I made sure to go back through the line a few times:

Speakers at the event were Bill Chait (founder of Sprout, the restaurant group behind Barrel & Ashes, Republique, and many other successful restaurants in L.A.), Phil Rosenthal (creator of Everybody Loves Raymond and diehard food enthusiast), and chef Derrick Fox (MasterChef), and Fran Drescher, this year’s event honoree, among others.  Many shared how cancer affected their lives and praised the work the ACS does and the support they provide patients and families experiencing cancer.

The event seemed like a rousing success, though I haven’t heard the amount of funds raised yet.  Last year it raised over $100,000 for the ACS.  Hopefully they were able to match or exceed that! 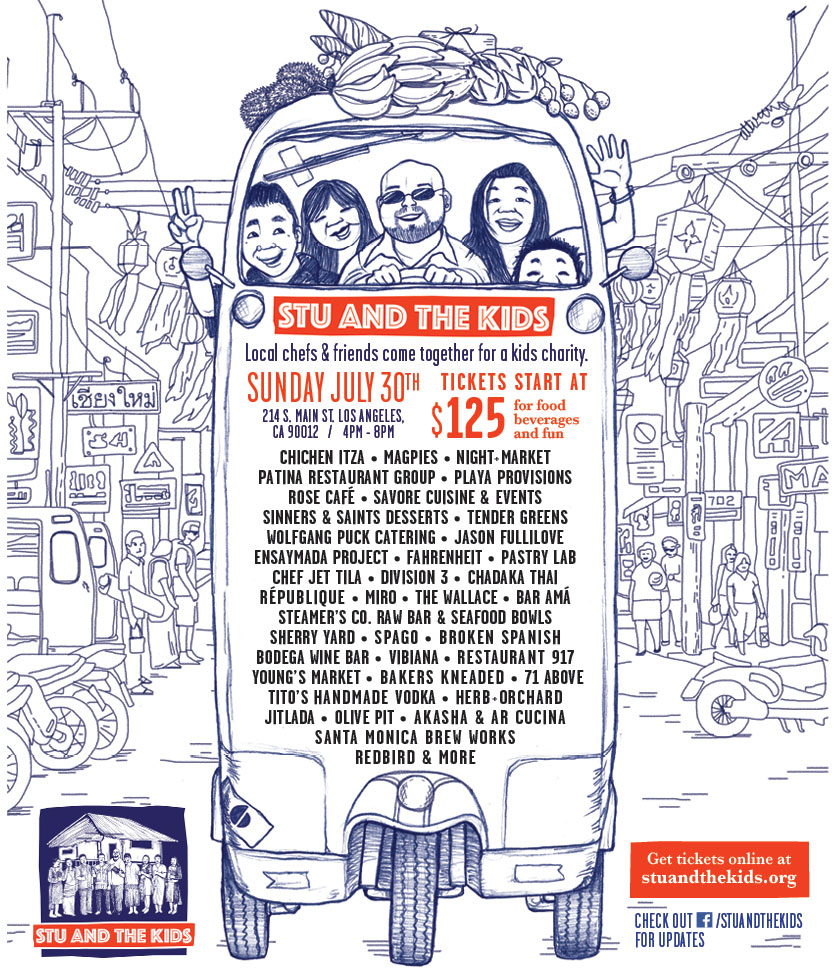