Abbot Kinney Boulevard in Venice has always had an interesting food scene, with some newcomers mixing it up with long-time establishments.  One of the newest places is Pork Belly’s Sandwich Shop (originally named Belly Up–domain name currently not working), which just opened yesterday.

I had wanted to go opening day, but circumstances prevented me.  I was not going to be stopped today, however.  To avoid any potential lunchtime rush, I arrived just before 11 AM and actually found a parking spot less than a block away.  Upon arrival, I was greeted warmly by one of the owners, Jon Swire, who told me about their smoker and went over the menu with me briefly.

I had already perused the menu online before arriving and had a good idea what I was going to get.  I knew I wanted to try both the smoked pork belly and the beef brisket, but I didn’t know if I wanted to eat two sandwiches on my own.  I also wanted to try the tater tots, so in the end I went with The Belly Up sandwich and the Chop Tots, thus fulfilling all of the above requirements.

Everything was to-go as their dining space was still under construction next door.  I received my food in short order and skedaddled back to the office to enjoy my early lunch.

The Belly Up:  “Our signature sandwich. Smoked BBQ Pork Belly topped with homemade coleslaw on a brioche roll. You’re gonna love it!” ($8.95)

This was a great sandwich.  The pork belly slices were THICK, fatty, smokey, and crispy around the edges. The cole slaw did not have much mayo, and the crunchy vegetation complemented the fattiness of the meat.  Simple, well balanced, delicious.

This poutinesque side was also quite good. I’m not actually a huge brisket fan, as I like my beef as medium-rare steaks, but I enjoyed the brisket.  The chopped chunks from the outer edges had a nice smokiness that I wish carried through a little more to the chunks from the center. The BBQ sauce is not too sweet and not too heavy.  The tots were not too oily and held up well in this dish.

Bonus:  A mini chocolate chip cookie was wrapped up with the Belly Up, and was warmed by the sandwich.  It was still warm when I popped it into my mouth at the end of my meal.  A nice touch!

I will definitely have to come back to try at least two other sandwiches:  the PBLT (“Thick sliced Pork Belly, lettuce, tomato and mayo on toasted sourdough.”) and the Smoky Balls (“Our Pork & Beef meatballs smoked then thinly sliced. Served with our homemade tomato sauce, peppers and onions on a grinder roll. All topped with melted cheese.”).

Update:  Went back the next day to try two more sandwiches for lunch…

To be clear, if you’re craving a BLT, this may not scratch that itch. Even if the pork belly was smokier and crispier, they are still much thicker than bacon and without all the salt. That’s not to say it wasn’t a delicious sandwich, which it was. The sourdough was perfect, fresh green leaf lettuce rather than iceberg, decent tomatoes. You just have to judge it on its own merits.

Only criticism I had was that it was two strips of pork belly across decently sized slices of bread. No matter how thick they were, two strips weren’t going to provide enough coverage, so I had many bites of just BLT (in this case the “B” stands for “Bread”). I would have preferred at least three strips of pork belly, and I wouldn’t have minded slightly less thick strips to make that possible.

Smoky Balls: “Our Pork & Beef meatballs smoked then thinly sliced. Served with our homemade tomato sauce, peppers and onions on a grinder roll. All topped with melted cheese.” ($8.95) 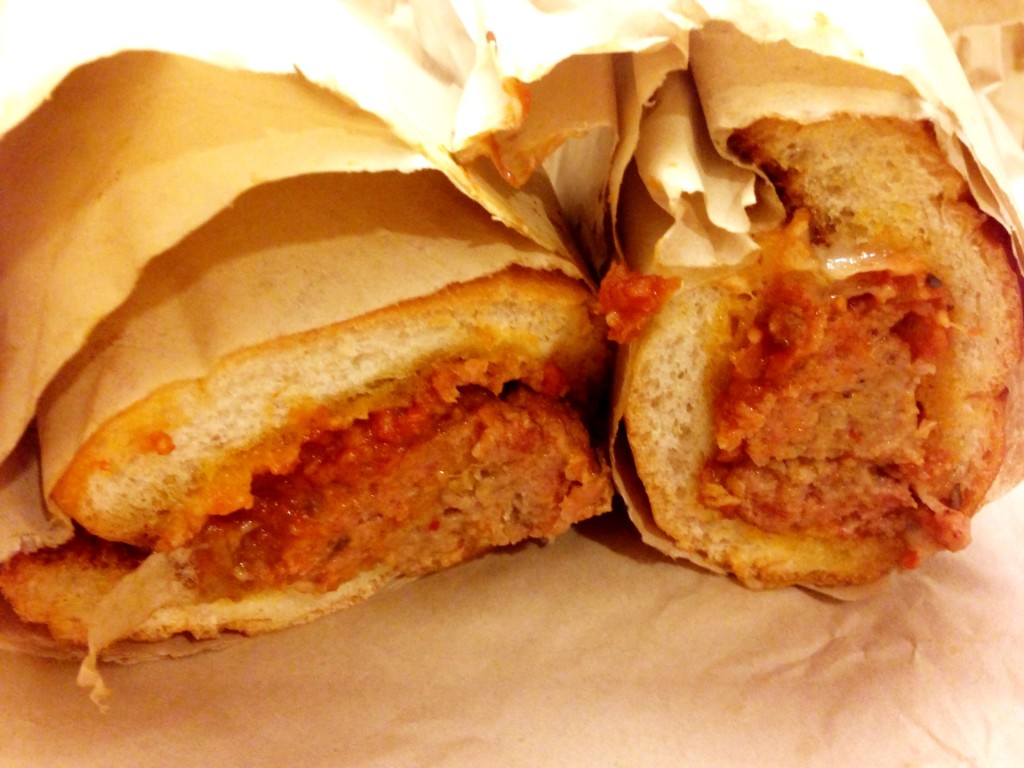 I didn’t realize how much the PBLT would fill me up, but I still managed to chow down the Smoky Balls. The sandwich was delicious as well, but not quite as described. The description said “thinly sliced”, so I was picturing large-ish meatballs (baseball sized, maybe?) sliced like cold cuts, but they were “regular” size (between a golf ball and a baseball) and cut in half. Also, I don’t think I got any peppers and onions.

Of course, it’s the taste that counts, and the meatballs tasted very good. The smoke sneaks up on you; it’s not very strong in the flavor of the meatballs, which tasted almost sausage-like with the mixture of beef and pork. Instead the smokiness goes up into the sinuses a bit. Without the onions and peppers, the sandwich seemed a little one-note, but I still enjoyed it.

I’ve now had three of the sandwiches, and so far the Belly Up is the clear winner for me. As I said in above, not a huge brisket fan, but I did enjoy it in the Chop Tots, so I may have to try their brisket sandwich, The Chop, next, you know, for science!